Toyota Hilux Revo is now comfortable as a car and comes.with cushy leather seats on the top end models. Dashboard has been redesigned and now dominated by a large tablet sized screen that will act as an infotainment system. The screen seems to stand out and can probably be removed. Revo interior despite being comfortable is still very practical with a sharp dashboard that keeps everything at one’s fingertips. 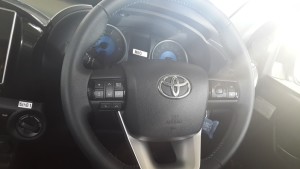 Despite the Hilux Revo being the sort of truck you can take anywhere, the precise steering is still optimized for nimble handling and car-like ease. Whether it’s a twisty farm track or a tight corner in a parking building, steering the Toyota Hilux Revo takes less effort thanks to its engine speed-sensitive, power-assisted, rack and pinion steering. Toyota Hilux Revo has automatic climate control, engine start/stop button with keyless entry and cruise control, new instrument cluster.

Toyota Hilux Revo comes with an Urban and Elegant Interior. Revel in a new sense of boldness and refinement with the elegant interior that perfectly complements the toughness of the legendary Hilux.

Enjoy convenience with a simple push of a button. Set to suit your preferred driving position, the powered adjustable driver seat on high end Toyota Hilux Revo lets you stay poised for control.

The digital meter panel is designed with high-quality finishing and features an illumination that enhances meter visibility.

The design of Revo’s three spoke ergonomic multi-function steering wheel is a perfect balance of style and practicality – incorporating control switches for Audio and Multi-Information Display (MID) functions. Steering wheel adjusts for both height and reach.

The 4.2 inch Multi-Information Display (MID) in middle of  Optitron meter displays useful real-time vehicle and driving information while you’re on the go.

The Multi-Information Display (MID) provides you with a constant supply of important driving and performance data, so you can monitor the performance of the HiLux at any given time.

The MID gives you a fast overview of everything from your current trip information, to average and current fuel consumption levels and average vehicle speed. It also displays compass, time and external temperature.

7″ touchscreen and 4.2″ inch MID and controls on steering wheel gives easy access to all information and entertainment

There is now a large 7″ tablet sized touch screen which can be used to not only manage audio and navigation systems but also watch DVDs.

Bluetooth allows you to make hands-free mobile calls and audio streaming via wireless. Keeping up with events is now easier and safer and with incoming calls automatically transferred from your mobile to the pickup truck, you don’t even have to interrupt calls when entering or leaving the Revo, because the connection is automatically transferred between the mobile phone and the Toyota Hilux Revo audio system. And because calls are routed through the HiLux Revo audio system, sound quality is excellent.

USB Connection allows you to play a range of music players as Ipod.

The coolest thing is that you can access all these features without taking your hands from the steering wheel, or your eyes off the road because fingertip steering wheel audio controls that let you change radio stations, adjust volume or switch audio mode are now available in Toyota Hilux Revo.

Sometimes it’s not an option to extend a project deadline because the weather’s not perfect. So it’s good to know that when you need to be out and about in all weathers, Toyota Hilux Revo technologies make life easier. Air conditioning comes as standard across all Hilux Revo 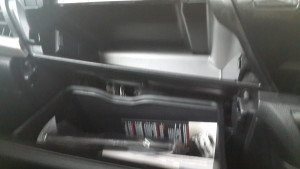 Toyota Hilux Revo now comes with a cooler box that allows you to keep your drinks cool.

Toyota Hilux Revo comes standard with remote central locking on all E and G models, G also has push start. For added security, an engine immobiliser system is also fitted in top scale G. The engine immobiliser is automatically activated when the key is removed from the ignition. An indicator light will start flashing to show that the system has been activated.

The system is automatic, and it will only allow you to start the engine when the code in the chip corresponds to the vehicle’s registered code.

Should someone else try to start the HiLux Revo with an unregistered key, the system blocks an ignition signal and a fuel injector control signal, so the engine can’t start.

Another example of the technology that makes Toyota Hilux Revo, Toyota Hilux Vigo and Toyota Hilux SR5 such a popular choice.
[cycloneslider id=”toyota-hilux-revo-interior”]