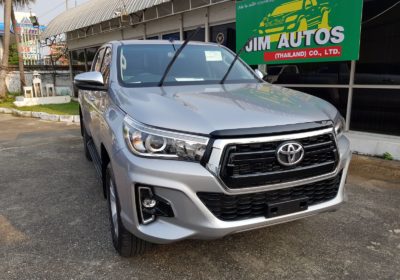 2021 2022 Toyota Hilux Revo Minor Change has been released and it is in ready stock for immediate shipment. There never has been a better time than right now to get your very own Toyota Revo. Please WhatsApp or Viber us now at +66-89-106-5701 to get the best deal on Thailand Toyota Hilux Toyota Pickup Revo or any other Thailand, Australia, UK, US or Dubai UAE vehicle in RHD or LHD. You may also drop us a line at jim12cars@gmail.com.

Here are some highlights of Toyota Hilux Revo Thailand:

Hundreds of our customers had booked their Toyota Hilux 2018 Revo and their vehicles were shipped the first month of their release. Be the first one in your country to get your very own Toyota Hilux Revo Thailand by emailing us at jim12cars@gmail.com.

Over 13 million Toyota Hilux have blazed trails around the world since 1968. From the Arctic to the Sahara, this unstoppable pick up has earned trust and admiration for its off-road capabilities and endurance. Now its latest incarnation, Toyota Hilux 2018 2019 2017 2016 2015 Revo is a Revolution in the making, it is bigger, wider, faster and way cooler than all its predecessors and available at cheapest prices in the world at Toyota Hilux dealer and exporter Jim Autos.

Even though many customers prefer calling the new Hilux 2015 Toyota Hilux Revo since it is being released in 2015 but it is technically 2016 Toyota Hilux Revo as the model year for this Next Gen Hilux will be 2016.