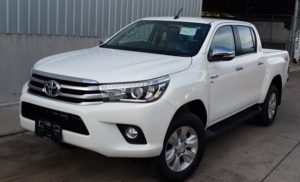 Single, extra or double cab, 2 or 4WD, manual or automatic, 2.4 or 2.8 litre diesel engines. Each Hilux Revo comes with a comfortable yet practical interior and a driving performance that’s as assured as it is inspirational. Buy your Hilux Revo now.