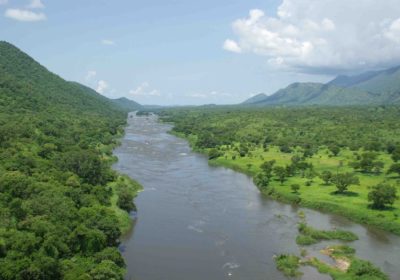 Information about South Sudan in Wikipedia

https://en.wikipedia.org/wiki/South_Sudan has the following to say about South Sudan:

South Sudan, is a landlocked country in East-Central Africa. The country gained its independence from the Republic of the Sudan in 2011, making it the newest country with widespread recognition. Its capital and largest city is Juba.

South Sudan is bordered by Sudan to the north, Ethiopia to the east, Kenya to the southeast, Uganda to the south, the Democratic Republic of the Congo to the southwest and the Central African Republic to the west. It includes the vast swamp region of the Sudd, formed by the White Nile and known locally as the Bahr al Jabal, meaning “Mountain Sea”. Nilotic peoples form the majority of its population. The territories of modern South Sudan and the Republic of the Sudan were occupied by Egypt under the Muhammad Ali dynasty and later governed as an Anglo-Egyptian condominium until Sudanese independence was achieved in 1956. Following the First Sudanese Civil War, the Southern Sudan Autonomous Region was formed in 1972 and lasted until 1983. A second Sudanese civil war soon broke out and ended with the Comprehensive Peace Agreement of 2005. Later that year, southern autonomy was restored when an Autonomous Government of Southern Sudan was formed. South Sudan became an independent state on 9 July 2011, following a referendum that passed with 98.83% of the vote.

South Sudan has a population of 12 million, with Christianity as the majority religion. It is a member of the United Nations, the African Union, the East African Community and the Intergovernmental Authority on Development. In July 2012, South Sudan signed the Geneva Conventions. South Sudan has suffered ethnic violence and has been in a civil war since 2013. As of 2017, despite not being ranked bottom in the latest UN World Happiness Report, it had the highest score on the American Fund for Peace’s Fragile States Index (formerly the Failed States Index), surpassing Somalia.

Please note that the information below is dated and given only as a starting point for your research. Please re-investigate with relevant authorities when planning your purchase. When your research is complete, please contact Jim as Jim is the leader in South Sudan car import and export and we can supply full range of vehicles to you.

Proforma Invoice must contain:
Specification and clear description of the quantity and quality of the goods.
Freight on Board (FOB) value
Freight Value (If applicable)
Currency of Payment
Mode of Transportation
Country of Origin of the goods issued by the competent authority in the Country of origin.
Insurance value (if applicable)

Transportation and Car Import Info for South Sudan for Diplomats

Some reasons that made Hilux a runaway success in the world are the 3 Rs: Hilux Robustness, Hilux Reliability and Hilux Resale Value. Hilux South Sudan is no exception. Hilux is as comfortable driving in Juba as it is in Wau and Yei. It is great value for money and at Jim Autos Thailand, Jim Autos Australia, Jim Autos NZ, Jim Autos UK and Jim Autos Dubai you get even more value for your money by purchasing Hilux at the cheapest price in the world. Remember, if you did not buy at Jim, you paid too much. No one can beat our quality vehicle at our price. Customers in South Sudan Import and Export Hilux and full range of Left hand drive vehicles from Jim branches Dubai, Oman, Bahrain, United States, Canada and Europe.

Toyota Hilux is also best suited to weather of South Sudan. It is therefore no surprise that there are so many Hilux admirers and owners in South Sudan and many of them proud customers of Jim. A lot of Hilux is imported in South Sudan every year and Jim has carved a significant mindshare in South Sudan, North Africa and Africa.

Shipping to South Sudan via roro and container

There are two main ways to have your vehicle shipped to South Sudan aboard a ship. The first of these is RORO, short for Roll-on/Roll-off, wherein a vehicle is driven on and off the ship by means of a ramp. This is the least expensive shipping method in some cases but when roro ships are scarce, this option may be more expensive than container shipping but is still preferred because of the ease of processing the vehicle upon its arrival in South Sudan.

Top Gear once attempted to destroy a 1988 diesel model by crashing it into a tree, assaulting it with a wrecking ball, submerging it in the ocean and setting it on fire but no luck, Hilux kept on humming. It is that robust because Toyota Hilux South Sudan is built on a steel frame and can haul up to 1450 kg of load, the 4WD Toyota Hilux Toyota Pickup has protection plates in the bottom to protect the major components. Down below we outline the top ten reasons for buying a Hilux in greater details.

Car exporter of full range of vehicles to South Sudan

Jim exports not just Toyota Hilux Toyota Pickup but full range or vehicles to South Sudan and Africa. Here are some vehicle types we export:

South Sudan is a Left Hand Drive Country and we export full range of Left hand drive vehicles from Dubai, Oman, Bahrain, United States, Canada and Europe. We find the very best new vehicles and the very best used vehicles. Jim exports not just cars but also spare parts, accessories and specialized equipment. Jim has been exporting high quality Thailand vehicles, Australian vehicles, Japanese vehicles, UK vehicles, Dubai vehicles and United States vehicles at affordable cheapest prices. We export to 100 plus countries and we ship vehicles quickly and efficiently and all our used vehicles are thoroughly reconditioned before their export.

Here are some of the reasons why Toyota Hilux Toyota Pickup remains the best selling pickup in South Sudan: